$UAL
United Airlines gapped up this morning, put in an initial morning high, then pushed through that high on increased volume. Not the highest volume of the day but an increase none the less. I was looking for the initial morning high and the trade line to hold support on a pullback, which it did. I got long and took 25% off in front of the high of day. It double topped and I ended up stopping out just below VWAP. That 25% take profit put my loss on this trade at literally a couple pennies.

When it was struggling to put in a high and double topping I started game planning a short if my trade failed and look to fade the gap. I got short too early with this idea. I have to quit getting short under VWAP before it tests. My first shot getting short stopped me out. When price action immediately dropped back below VWAP I knew I was right but got shook out. I re-entered the trade short and ditched 25% of my position quickly so I could take a little profit and lighten up my position. My next target was in front of the current low of the day then 25% in front of a pivot high from yesterday just over $30. I got to my second target and dropped 50% of my position then noticed volume wasn't increasing on the way down. When the low broke there wasn't much volume coming in and it was already on an extended pull downward. I spooked and closed the position. Turned out that was the right move but realistically I should have held to my third target. The pullback that occurred immediately after I closed would have made me incredibly uncomfortable, even with 25% left on the table, I'm sure. I need to get used to that though. Monster trade though!

I do want to note that I'm trying to take my profits based on the chart and not on reward vs risk ratio's. My last trade here is proof that if profits are taken per the chart and not the ratio, the value of the trade has potential to increase dramatically. 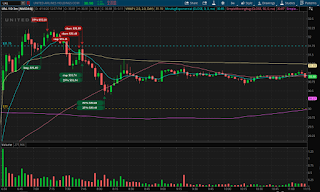