I stopped posting at the beginning of the month from what I thought was being too busy. In reality, it was just laziness and not finishing my day like I should. Looking back over all these trades I can see mostly chop. I did make some really nice trades but for the most part, it was junk. I did, however, manage my risk very well. I think for this coming month I need to open up my stops a tiny bit on small caps and evaluate my trades more to make sure I'm steering clear of choppy waters. I also need to journal every day. That may have helped me this month. I should have done a write up every day but I'm confident just by looking at the pictures below I know why I did what I did and what I was thinking in every one of them, with the exception of the two where I left the info off the pics - those I was being a total idiot trading and that tells me enough (don't be an idiot).

I just can't even with this one... I was waiting and waiting for this thing to pull into test $19.15. It pings that level almost to the penny and I got long. I didn't like the decrease in volume back up to the nearest resistance around $22 so I got flat. So stupid... I got mad at myself and convinced myself I needed to get back into it if it gave me an opening and I did. Then I felt like I was chasing so I closed it out. If I'm going to enter a trade I need to execute my plan, not get all whacked out of my head during the trade. Wining day but really frustrating. 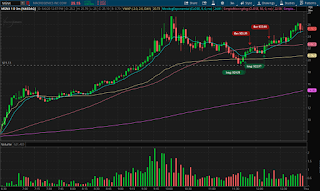 I need to dial it in. I'm not trading as badly as I was in January but I'm not trading well the last couple weeks. Today was no different. Lots of losing today but a very, very small loss on the day P&L wise. Keeping my risk under control is the what's been saving me lately.

$CLSK
I liked $CLSK for an entry off VWAP and the previous high of day for a move back up to and through the last high of day. I got long and had my stop set a little too tight and got stopped out. I re-entered and it took until the beginning of lunch to get back up to the high of day. When we got up in front of the previous high I decided to close the position in full, expecting that it was lunch and volume would die down, and that it would either roll over or bobble around VWAP through lunch. I didn't expect it to be an all day mover. I left a ridiculous amount on the table by doing this. I think I made the right call though because we haven't seen an all day runner in a while and it's pretty unusual.

$FB
Facebook chewed me up. There was long term resistance on Facebook around $209.65 and I was shorting off the previous pivot. My stop should have been over the high of day. Regardless I would have stopped out but I would have done so once instead of twice. The second time I got short I was playing off the resistance at $209.65 and the double top on the day. I got stopped out on crushing volume so when the level tested I got long. I got one piece off and, what do you know, got stopped out a third time! Beyond frustrating how choppy this traded. Later in the day there was some bad news released and market wide, everything started selling off. I took advantage and grabbed another short looking for a 1:1 win. I got it and walked away from this one with a small loss from the morning session.

$MRNA
I've been watching this name and knew there was heavy resistance at $48.00. I got long for a second expecting it was putting in the turn but quickly realized I was going after it too soon and $48 needed to be tested in full so I closed my position. When it came crushing through $480 on the heaviest volume all week I got short then added when it came up to $48. I thought it would completely dump - no such luck. It turned and I got stopped out...

Pretty boring day today. Everything was churning sideways with no real, distinguishable patterns. Early in the day $MRNA looked like a double bottom but I wasn't very confident in it, so I sat it out. It ended up making back up and over the high of day, so in hindsight, it would have been a really nice trade. The $SPY also made a move at the end of the day. I liked it on the pull back to $282.00 but we were getting so close to the end of the day I figured, what's the point. I didn't want to get involved and risk a loss on the day out of what may have been a boredom entry. It also did what I thought it would do but whatever - there's always tomorrow as long as I protect today.

Same trade I took yesterday. Moderna short from VWAP and the break of the initial morning high. Today I was locked into holding through the break of the morning low and into yesterday's close. All was good until I remembered I had a meeting. I ended up closing the trade in front of the low of day so I could take my meeting. Bummed I had to close early but stoked to start the month with a win.

One winner, one winner I should have held longer.

$ZM
My first trade was in Zoom Video Communications. I  caught a really nice entry and pealed my first two pieces off the table right where I wanted to. Just after taking my second piece off the table the tradeline broke so I got flat. Nice little win to start the day.

$MRNA
I'm still watching Moderna, since my brother is still long the name. It also has a really nice range. Anyhow, I loved the break of the initial morning high and VWAP and was looking for a move back to the low of day. I caught and okay entry and was able to add shortly after entry. It started making the move I was anticipating and for whatever reason, I got shook and closed the position. What started shaking me up was that I entered during lunch and felt like I shouldn't have. Still not sure if I should trust lunchtime moves like this - sometimes I feel like it's okay because it's not a breakout. It's a different kind of trade. Idk... Bummed I didn't hold it but I felt uncomfortable and closed it out. That was the right thing to do.