Pretty irritating morning, to say the least. I got beat up a little bit on $APM; the first trade I should have waited for VWAP to test before entering. I jumped the gun and entered prematurely then on my second attempt I saw a flag forming on the 15-min chart and took a shot. Realistically, I shouldn't have been in the first trade and should have only taken the second, even though it looks opposite when looking at the 3-min chart. 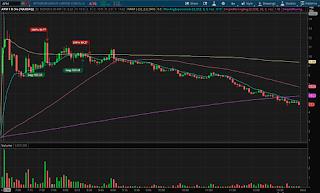 In the afternoon session I saw $ADIL creeping back up to VWAP and waited for it to break through. Again, I entered a little prematurely and had my stop set on the top-side of the previous upward push rather than the previous pivot-low. I stopped out on my first shot at this thing, which was pretty irritating. Had I put my stop under the pivot-low I would have been fine. Also, had I waited to enter I would have been fine. I need to be a little more patient with these moves. Even though my second shot at this one was a monster, I still ended the day with a small loss on the day because I was a little too trigger happy. Anyhow, on my second attempt I entered a little heavier than I meant to so I quickly adjusted my position size to accommodate a stop under the previous pivot-low. My first take profit was in front of the morning high; my second was in front of a level of resistance from about 9 months ago; and my final take profit was at $3.15, a level of resistance hit twice and rejected in the last year. I had my final order out at $2.95 initially but eventually corrected myself. The target was $3.15 - if I'm not going to trade my plan and not hold to my targets, what's the point of trading at all. I'm glad I changed my sell order. It was a nice confidence booster to hit it. I had no clue it would rocket to $4.00. It'll be interesting to see if this thing is still in play tomorrow.
$ADIL 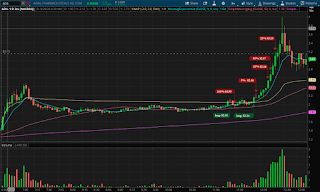 I'm obviously still struggling to journal every day but there's only so many hours in the day. Trying to find balance between the importance of journaling and rest. None the less, made a great trade on $PLL today and went back for seconds on it in the afternoon session. Stopped out on the second attempt but I was in smaller size and kept the loss small. Was really just looking to add to the day without taking much away from it. Really nice day though. 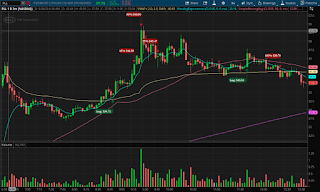 It's been a hot minute since I posted but I've actually had a couple people ask me how my trading is going and it would be nice to point them to my trading journal but it's a ghost town. In July I got insanely busy with my day job, to the point I shouldn't have even been trading, and started taking on losses like no other. I also had a trade put me on tilt and struggled to get my mind right from in - it was $JMIA. I was in the position long, took two profits, then added back to a full size position plus what I was up in the trade and ended up getting stopped out for a full size loss. If the trade had played it would have been a massive winner. I didn't realize I wasn't mentally prepared for that big of a swing into a loss. By the time July ended I realized I was too busy to trade and although I was still trading I was trying to be more selective of my trades. It didn't seem to matter and I ended August trading even from beginning to end. I'm still ridiculously busy with work but I am doing better, somewhat. I went on tilt one day last week and blew a couple day's gains. I'm certain I need to find a work-trading balance if I'm going to continue. We'll see how this month ends but I'm feeling pretty good about it, especially after today. I need to find my way back to daily journaling too; it's incredibly helpful and probably (partially) why I couldn't get my act together the last couple months.

Not to make excuses but another thing that made trading the last couple months harder is light volume and liquidity in the market during the summer months. I took a bath last summer and did it again this summer. I think it's a compound issue where I need to 1) determine whether or not I should even be trading based on my work schedule and 2) take the summer months off from trading and focus strictly on work. Lesson learned this year. We'll see if I can apply the less next year.

Because I decided to journal tonight I thought I'd share my trade. Realistically, it's the losing trades that provide the most benefit in posting and reviewing but this trade was a mix off both. I hit a couple home runs with a couple losses in between.

My 1st entry was a little premature on the break though VWAP but I knew it and put my stop under the low of day. When the price was officially above VWAP I added to the position twice and moved my stop up. The trade looks absurd in comparison to the move the stock put on the rest of the day but I hit my 1st and 2nd take profits right on target. I thought this thing had $7.00 in it but I chickened out knowing I was up huge in the position and sold it off at $5.68. Still a home run but I didn't follow my plan.

I took 2 more shots trying to get back into the trade, both with only 50% of my risk to keep my loss small, were I to lose (I lost). Looking at it now had I held my initial stop and not closed that trade early I wouldn't have stopped out or even been in the 2nd trade. That was another mistake from the day.

Once price moved through the $10.00 area and was holding, I waited for the tradeline to show support and the second it did I hit it again. When I went to take my first take profit the price jumped and was up by $14.00. At that point I ditched the whole trade. We were in lunch now and it just got WAY more volatile than I like or am comfortable trading. I debated hitting it again at $14 on the next break but as tough as it was, I sat on my hands. Lunchtime breakouts constantly fail and I shouldn't have even taken my last trade let alone jumping into another. None the less, pretty excited about today. 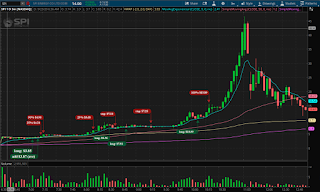