I haven't been doing much trading lately. I'm doing my best to be as patient as possible and only make trades I feel VERY confident in. After barely pulling the trigger lately I got skunked on 3 trades right away this morning and was pretty upset. I'm down on the year dollar-wise but I'm down because I've been scaling up throughout the year. Had I traded the same risk all year I would be well in the green. I'm trying to keep that in mind but psychologically, it's tough to know money is lost, based on a technicality or not. It's also frustrating to sit idle for so long and when I finally see some trades I like, I pull the trigger and strike out. I know that's part of the game but still.

I brushed off the losses and got my head together. I saw $PLTR. I didn't necessarily like the setup on the 3-minute chart but the 15-minute and daily looked promising. I also like that price had moved below VWAP three different times and sucked right back up. My thesis was that it would move back up to test all time highs and I was right, in a BIG way. I had an opportunity to triple my position while moving my stop up to a break even point on the trade and I took advantage. Easily, my best trade of the year in execution and profitability. Really excited to have crushed this one! 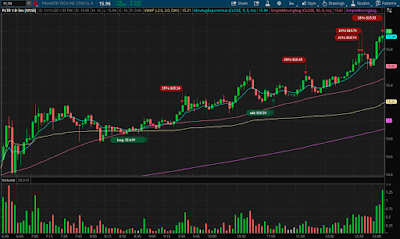