Very small win today on a scalp. The market gapped up this morning but started fading down toward yesterday's lows. There was nothing I liked in the morning session. Nothing notable during lunch and Trump was supposed to speak about coronavirus at 3:00 PM EST, right in the middle of the afternoon session. There was a point when both the $SPY and $TVIX were right on top of VWAP and I thought if VWAP broke on the $SPY, we'd get a nice little pop on $TVIX. As soon as $SPY broke VWAP and hammered in a small scalp as planned. Not the greatest trade but there was a setup, a plan, and my risk was easily defined so I had no issues going after it.

I am getting overly curious where I'm at in my P&L. I know I took a whopper of a loss last Wednesday from over trading and refusing to close the day red (did anyway). Other than that single day I've been rock solid since the beginning of February but I'm dying to know what my trendline looks like for this month and overall. I started the month with a commitment to not look at my P&L at all this month and just trade. It's a bit unsettling not knowing where I am exactly but it's more freeing than I thought it would be. I've had a couple losing days. I know I had that whopper last week. I know ending the day last Wednesday I was thinking, "it's gonna take a couple days to dig out of this one.." Other than that, I've been closing my days green (I think). Couple more weeks to go so we'll see. 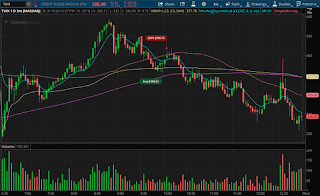