Super boring day for the most part. The market dropped past one key level and into the teeth on the next then just sat, consolidating most of the day. During the lunch session an announcement was made that the fed is going to inject $500 billion into the economy tomorrow and another $500 billion in three months, and on that news every major name started surging. I quickly looked for a name that could give me range but was also trailing behind the $SPY, so I could get in somewhat comfortably.

I entered $AMD just below VWAP, looking for the push back up to the high of day that the $SPY made. I got my first two pieces off successfully but I'm not sure where I went wrong with my last piece. I would have stopped out on it regardless but my stop was set at $41.25 and it took me flat $0.15 below that. Pretty annoying but I either didn't have my stop where I thought I did or there weren't any buyers at that price, which would be unusual but possible. A little annoying to take a loss on the third piece of my position when all three pieces should have been profitable. I'm also not sure why my first and second take profits averaged in my screenshot. My first piece (25% of my position) came off at $41.83 and my second piece (50% of my position) came off at $42.23. None the less, really nice trade. 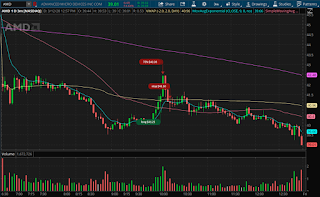