Pretty decent day. I haven't taken any trades the last couple days in an effort to slow down and regain some focus I feel like I've lost recently. I've also felt like I've been overtrading and getting myself into the same situation I was in back in July. Anyhow, my goal is to be extremely picky about what I'm trading and why. I started the day off with a trade on $UUU but got stopped out of it. Price moved through VWAP, tested, I got long, it moved to the nigh of day and rejected, HARD. When it rejected it pushed from the high of day back under VWAP and rather than holding all the way to my stop, I bailed. A few minutes later it rolled over entirely.

My second trade was on $PINS. It gapped up HUGE today and I felt like it would put in an exhaustion fade while long term holders take profit. Volume decreased as the price was grinding higher and as soon as I felt like it broke I hit it. One issue I had while in the trade was I missed my second take profit. I was on the phone when it rolled into $61.50 and should have taken that profit as soon as I realized it hit it and was retracing. Not doing that made the hold through the lunch session pretty uncomfortable. Alas, I got $61.50 as the day came to a close and my final just before the bell. I though about holding after the bell for my final but I haven't been trading great lately and shouldn't be trying something new until I'm back on a streak. 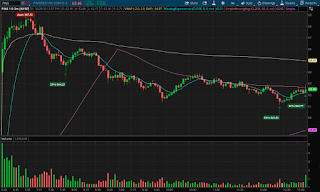