I sat this morning out because I was still frustrated with myself from yesterday. I wasn't in the right frame of mind to take any trades this morning. I wasn't seeing much anyway but I'm still incredibly disappointed with myself in how I behaved yesterday. What I was doing is exactly how people blow up their accounts. I worked my way back to profitable but that's beside the point and pointless. The behavior is unacceptable.

Anyhow, this afternoon I was feeling a bit better. Apple was pushing most of the day and was pretty extended from VWAP going into the final hour of the day. There was quite a bit of resistance at the $277.50 area and when it hit that level and failed on increased volume, I hopped in short with a really nice entry. My idea was that we'd reject the $277.50 area and work our way back to VWAP to close the day. I got within 6 cents of my first take profit but didn't quite get it when volume increased and price jumped heavy against me. The breakdown failed. My trade was still in play but I decided I would either hold to my stop or if price moved back below my entry, I'd flatted the position. We dipped just below my entry for a second and I got flat. Although price did eventually make it's way back toward VWAP, it never made it all the way there and I was running a tight stop in this position. Had I stayed in the trade I would have taken a loss. Instead I walked away with a (tiny) profit.I feel like I executed this trade very well even though it wasn't even a base hit. The point is, I had an idea and I executed on that idea. New information became available in the trade and I acted on it. 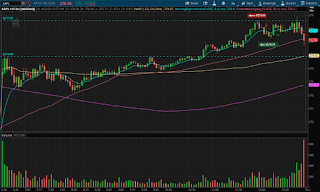