I loved $RCL short on the day but I misjudged the range it would inevitably put in. I thought we were looking for a move clear down to the $21.00 area so I sized my trade accordingly and had my mind frame set on that move. I got short under VWAP, looking for a tradeline-VWAP crossover. and on that crossover was looking for the tradeline to push the price down pretty aggressively. When the crossover occurred, price just sat there and held that $35.00 level. My read was that it was going to push higher so I took 25% of my position off the table a little early with that thought. A few minutes went by and I just kept thinking I misjudged this trade and I no longer liked the risk I had on the trade vs. the reward I was after (now thinking we were only going to make it down to around $33.00. I decided I wasn't going to stay in if it looked like it was going above VWAP and it made a volatile move (doesn't look like it now) like it was going to blast through VWAP. I cover the last 75% of my position and within 5 seconds, it started rolling over to make new lows on the day. Pretty annoying since I took a loss yesterday but the more I think about it, the trade I was in wasn't the trade my thesis was based on. The right thing to do was take it off because I didn't like my risk to reward setup. The fact that I could have made more money isn't really relevant. My thesis was wrong and I made a little money anyway. I'll live with that. 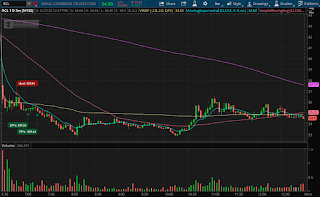