This was a tough trade today. We gapped up this morning and held the 2018 low on the $SPY. I was waiting and waiting and waiting for a trade to develop somewhere and saw $FB pulling into the initial morning high and VWAP. My idea was to get in if it held VWAP and ride it back up and through the high of day taking my profits at 1:1, 2:1, and 3:1. I got long as planned and got my first piece off but soon after put in a nasty red candle that ate up the previous candle and a half. Right then the $SPY broke below VWAP and I thought for sure it was signalling a push back to the low of day so I close my position at my entry. Eventually, the trade worked itself out but I wasn't in it any longer and wouldn't have stopped out until I had 2 pieces off the table. Regardless, I left some on the table in this trade but I feel like I was half right; the trade didn't push to new highs on the day until after lunch and I would have stopped out after taking my second piece. Tough leaving money on the table but my number one job is to protect my downside to the best of my ability, and I think I did that well. A little profit on the day and we live to fight another day. 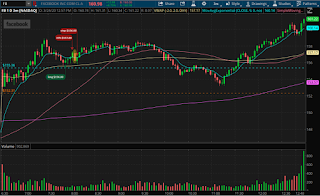