I need to pull my head out... Friday I didn't fire off any trades but genuinely didn't see anything worth trading. Yesterday I saw some nice setups in $AIM but didn't take those trades. The first setup was leading into lunch; the second was during lunch; and the third setup, also in the middle of lunch, I didn't like the aggressive pullback into support. Now into today, I'm sitting gun-shy and not pulling the trigger when I should be and letting that effect me to the point I jumped into a trade on $MSFT that wasn't a great setup or a setup I like trading. My frustration with not trading caused me to take trades I shouldn't have. I need to just take the trades I should take in the first place. $CLX was a no brain setup with hardly any risk and 5x reward. $MSFT I should have been in down at VWAP. I'm incredibly frustrated with myself.

Anyhow, frustration aside, I entered my first trade on $MSFT on the pullback into previous support and got stopped out. When I saw the trade was still valid and I merely got sniped out of the position, I reentered but I could have done better on my take profits. Not very happy with the day. Tomorrow and the rest of the week, if I see something and it falls within my rules, I'm taking the trades, period. 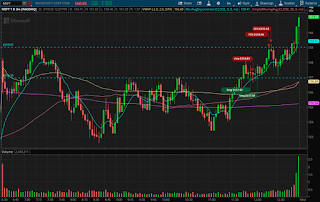