This morning was frustrating, to say the least. I really liked the setup on $UBER from the daily chart and once it put in a new high of day on increased volume, after consolidating in a pendant and breaking through what I was reading as a triple top in the morning session, I felt strongly we'd start making a move back up toward $41.50. I waited for the pull back and got long with my stop below the trade line and below all three levels of support from the pendant/triple top. Immediately after getting long we broke down and I was stopped out for a loss. To add to my frustration, a surge of volume came in and the ask started getting bought up right from my stop, to the penny. That surge in volume pushed the price back up to my original entry (from before I stopped out). I had to reset and think, do I take the loss on the day or hit it again?

I hit it again and put my stop one cent below where I had it before, confident my theory was right and I only got sniped by luck of the draw. The surge in volume that took out the red candle I lost on was my signal. I got long and took my first profit a little sooner than planned in my original trade but I needed to clear 25% of my position in front of the high of day. To compensate, I extended my second take profit a little beyond where I initially planned then took my final piece out as planned at $41.09. Had the stock been cranking I would have held on beyond $41.09 but the extensions higher were getting smaller and smaller from my point of entry and volume on each push was decreasing. Super stoked on turning my losing day to a winning day. 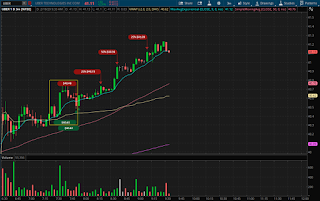